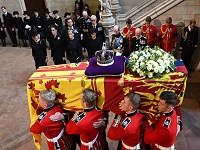 Yesterday, on September 19, 2022, I (like many) watched the one hour funeral service for Queen Elizabeth II. As I did so, three things stood out for me.

First, a recognition of her many years of dedicated service in her role.  In the opening bidding by David Hoyle, Dean of Westminster, he said, “With admiration we recall her lifelong sense of duty and dedication to her people.” She was after all the longest-serving monarch in British History. The Queen won the hearts of her people through her love and loyalty over the many years.  Back in 1947, on her 21st birthday, she had pledged: “I declare before you all that my whole life whether it be long or short shall be devoted to your service and the service of our great imperial family to which we all belong.” Whatever people may think of the monarchy as an institution, what is clear is the high regard that so many had for the Queen herself, as she fulfilled that pledge through decades of change.

Second, what struck me as I watched the funeral, was the mention of the Queen’s personal allegiance to Jesus and the Christian faith. Archbishop of Canterbury, Justin Welby, in his sermon, said that “Her late Majesty’s example was not set through her position or ambition, but through whom she followed.”  Whom she followed was often the topic of her Christmas speeches. For example, in 2016, she said the following words: “At Christmas, our attention is drawn to the birth of a baby some two thousand years ago. It was the humblest of beginnings, and his parents, Joseph and Mary, did not think they were important. Jesus Christ lived obscurely for most of his life, and never travelled far. He was maligned and rejected by many, though he had done no wrong. And yet, billions of people now follow his teaching and find in him the guiding light for their lives. I am one of them.”[1] In her Christmas 2000 message, Elizabeth said, “To many of us our beliefs are of fundamental importance. For me the teachings of Christ and my own personal accountability before God provide a framework in which I try to lead my life. I, like so many of you, have drawn great comfort in difficult times from Christ’s words and example.”[2] She may have been the Queen, but it certainly seems that she saw herself as a subject of the King of Kings.

Third, what stood out for me from the funeral broadcast was the hope of the Gospel, especially as the Scripture readings were solemnly read. There was John 14:6, and the words of Jesus, “I am the way and the truth and the life. No one comes to the Father except through me.” There was also the mention of the death of Christ for our sins and his resurrection. 1 Corinthians 15:20-22 was read, which says, “But Christ has indeed been raised from the dead, the firstfruits of those who have fallen asleep. … For as in Adam all die, so in Christ all will be made alive.” Sooner or later, death comes for everyone. According to the Bible, death ushers a person either into the presence of God in heaven, or into the place of complete separation from God in hell.  Yet, the place we go after death is determined by how we respond to Jesus Christ before we die.  John 3:36 puts it like this: “He who believes in the Son has everlasting life; and he who does not believe the Son shall not see life”.  Wonderfully, God has made a provision for us, so that we can have eternal life.  All we need to do is believe/trust in Jesus. One reading in the funeral service was 1 Corinthians 15:56-57 which reads: “The sting of death is sin, and the power of sin is the law. But thanks be to God! He gives us the victory through our Lord Jesus Christ.”

I once heard a true story about an eight-year-old girl, Monika who fell into a pit, in Kenya, breaking her leg.  An older woman named Djari saw and rushed to help.  She climbed into the pit to help the young girl, but there in the pit a black mamba snake bit them both.  Monika was taken to the medical centre and admitted. Djari went home feeling tired and went to sleep and never woke up.  She died. The next day, the nurse explained this death to Monika telling her that the snake had bitten both of them, but all of the snake’s poison was expended on Djari, having bitten her first, so that none of it was left to give to Monika.  This illustrates the act of love that Jesus showed when he died on the cross.  At the cross, Jesus took all the poison of our sin into his body and he died for us.  Now, the poison of death from sin can’t harm (“sting”) us.  At the conclusion of the funeral sermon, this statement was made: “Christian hope means certain expectation of something not yet seen. Christ rose from the dead, and offers life to all, abundant life now, and life with God in eternity. As the Christmas carol says, ‘Where meek souls will receive him still, the dear Christ enters in.’” How true that is! For the one who humbly receives Jesus as Savior and Lord, He enters in and brings eternal life.  Have you done that? If you’re not sure, settle the matter today!